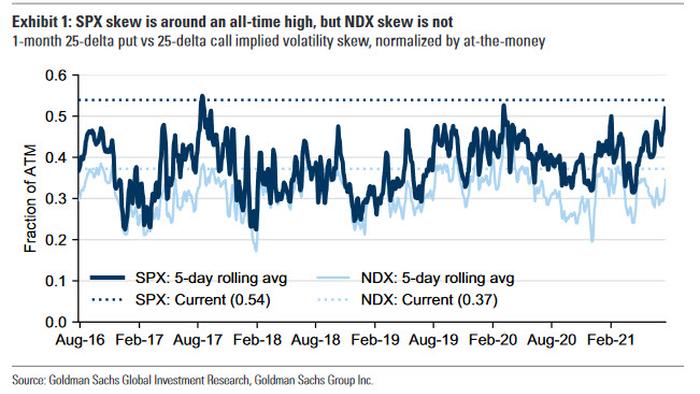 
At the end of June, when the S&P was making new all time highs day after day, and when the VIX was touching fresh 2021 lows, we cautioned that the skew index just hit a new all time high – meaning that put options have been unusually expensive relative to at-the-money options, helping support the put-heavy VIX index. As we further added, high skew, which compares put option prices with at-the-money option prices, has reached new all-time high, and reflected investor perception that high volatility would return should markets sell off.

Commenting on this unusual move, we said that it shows that while on one hand traders seem complacent, they have never been more nervous that even a modest wobble in the market could start a crash. By extension, “they have also never been more protected against a full-blown market crash.”

So fast forward to the violent, if brief, air pocket (and hardly a full-blown crash) the market experienced late last week and on Monday, which saw stocks tumble the most in months… only to soar right after. In retrospect, traders have the record high skew to thank for that because while risk reversed sharply on Tuesday and continuing today, traders were fully hedged and ready to pounce.

So following up on his observations from a month ago, when he first noted the record high skew, Goldman’s derivatives strategist Rocky Fishman wrote that this week’s volatility pushed equity implied and realized volatility higher, with the VIX briefly hitting 25 during the day on Monday (19-Jul)…

… even if in absolute terms vol is not high: three-week SPX realized vol (12.1%) is still below year-to-date realized vol (13.4%),and Tuesday’s rally brought the VIX back under 20. More importantly, in response to record downside skew correctly implying that a sell-off would bring much higher volatility, skew has now moved even higher – at least for the S&P 500.

Furthermore, the SPX has not had one-month realized vol as high as the current VIX level (19.7) since November – indicating that options continue to be persistently expensive, which also means that traders are hedging to outsized moves both higher and lower and any selloffs are likely to be fleeting as hedges are cashed in.

That said, given the recent precedent for quick sell-offs to be followed quickly by low volatility, Goldman expects volatility to subside in the near term with more likelihood of a sustained increase in Q4, and a big reason for this is the persistently high index skew.

SPX index skew continues to be at near-record levels, which we see as driven by a lack of downside sellers as much as demand for hedging. The strong reaction of the VIX to Monday’s sell-off, with the VIX up over six points at one point intraday, proved that high skew was justified – at least on a very local level…. on a more persistent sell-off, it would be difficult to sustain the level of implied volatility that skew would indicate.

Meanwhile, from a cross-asset standpoint, Fishman adds that if interest rates staying this low has the potential to be a catalyst for further equity upside (unless they plunge too fast), leaving the potential for near-term asymmetry in SPX potential returns that is the opposite of what option markets are implying.

So how does one trade the persistently sticky record high skew? Goldman continues to like levered risk reversals as a way to take advantage of this dynamic: Sell a 17-Sep 3800-strike put (12.1% OTM) to fund 2x 4550-strike (5.2% OTM) calls for zero net premium. The trade would be subject to dollar-for-dollar losses shouldthe SPX close below the downside strike at expiration.