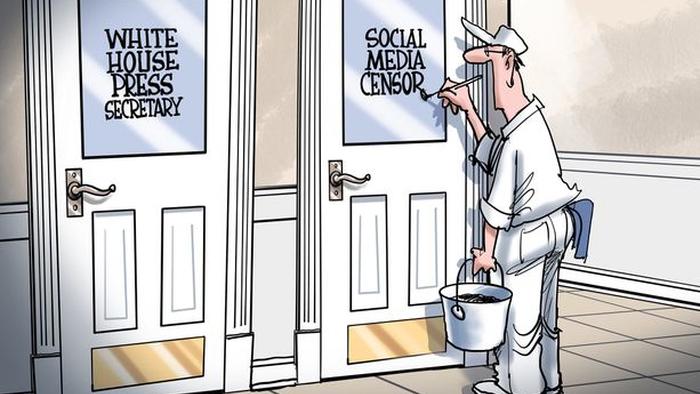 There was an unnerving conversation between between Biden White House Communications Director Kate Bedingfield and MSNBC host Mika Brzezinski that shows how much ground has been lost on principles of free speech. In an exchange on Morning Joe, Brzezinski asks Bedingfield why Biden has not completed his promised review of Section 230 and create an avenue to held social media companies “accountable in a real way” for spreading “misinformation” about vaccines.

Brzezinski ignores not only the constitutional implications of such a move but ignores how such an approach would eviscerate free speech and free press rights.

Equally chilling is the response.

Bedingfield agrees and assured Brzezinski that the Biden Administration believes these companies should be held accountable for allowing others to voice doubts or dissenting opinions on such questions.

Bedingfield assures Brzezinski that they are “reviewing” Section 230 and that the Biden Administration does believe that the media companies need to d be held “accountable.”

Vaccine “truth” has become the latest means for calling for more censorship from social media companies.

It is better than the prior use of election misinformation because now advocates can claim that free speech is actually killing people.  Indeed, President Joe Biden recently declared publicly that Facebook is “killing people” by not censoring free speech.  He later walked back his comments.

Keep in mind that these companies already have the largest censorship system in our history. It is being managed by private corporations but directed to some extent by government officials. Just this week, the White House admitted it has been flagging “misinformation” for Facebook to censor. This outsourcing of censorship allows government officials to do indirectly what they cannot do directly. It creates the specter of a type of shared shadow state.

Facebook only recently announced that people on its platform may discuss the origins of COVID-19, after previously censoring such discussion — but it still bars opposing views on vaccinations and the pandemic. Other companies actively block wayward thoughts and views; last week, YouTube was fined by a German court for censoring videos of protests over COVID restrictions.

When Twitter’s CEO Jack Dorsey came before the Senate to apologize for blocking the Hunter Biden story before the election as a mistake, senators pressed him and other Big Tech executive for more censorship.

In that hearing, members like Sen. Mazie Hirono (D., HI) pressed witnesses like Mark Zuckerberg and Jack Dorsey for assurance that Trump would remain barred from speaking on their platforms: “What are both of you prepared to do regarding Donald Trump’s use of your platforms after he stops being president, will be still be deemed newsworthy and will he still be able to use your platforms to spread misinformation?”

Rather than addressing the dangers of such censoring of news accounts, Senator Chris Coons pressed Dorsey to expand the categories of censored material to prevent people from sharing any views that he considers “climate denialism.” Likewise, Senator Richard Blumenthal seemed to take the opposite meaning from Twitter, admitting that it was wrong to censor the Biden story. Blumenthal said that he was “concerned that both of your companies are, in fact, backsliding or retrenching, that you are failing to take action against dangerous disinformation.” Accordingly, he demanded an answer to this question:

“Will you commit to the same kind of robust content modification playbook in this coming election, including fact checking, labeling, reducing the spread of misinformation, and other steps, even for politicians in the runoff elections ahead?”

It is not content modification. It is censorship. If our representatives are going to crackdown on free speech, they should admit to being advocates for censorship.

The public however is not entirely sold on censorship on an expanding array of subjects from gender identification to election fraud to criticism of foreign governments. That is why the pandemic is the perfect vehicle for getting a free people to turn against free speech. You simply declare, as did Biden, that free speech kills. It can kill you. You then push companies to censor more under the threat of being held “accountable.”

The fact is that you generally cannot hold people legally “accountable” for saying things that politicians or media figures like Brzezinski do not like about vaccines or climate change or any other controversy. The regulation of companies can offer some regulatory avenues for inducing corporate censorship like threatening to take away immunity if they do not serve as surrogate censors. However, that can also raise constitutional issues both as a question of corporate speech or converting these companies into state actors.

The greatest danger is that these political and media figures are signaling that they want even greater levels of censorship and that these private companies will accommodate them. They already have. The result is the expansion of an already massive censorship system that controls much of our political discourse.