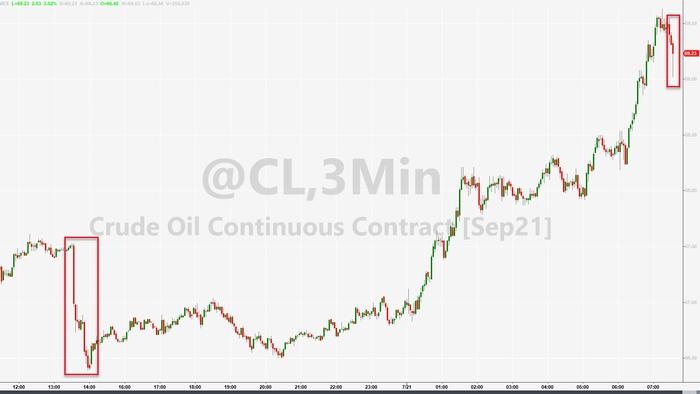 
After the initial tumble last night – after API reported an unexpected build in crude inventories (and big build in gasoline stocks) – oil prices have surged higher overnight and across the US equity market open as all those Monday fears appear to be evaporating once again.

“Risk-on is the main driver,” said Giovanni Staunovo, an analyst at UBS Group AG in Zurich.

“I still believe oil fundamentals themselves are supportive, but the last 72 hours were primarily driven by shifts in investors’ attitude to risk.”

Maybe this morning’s official data will reignote some sense of fundamentals in the energy complex… however fleeting.

Analysts expected a 9th straight weekly draw in crude stocks, even after API reported an unexpected build, but were wrong when the official data showed an even bigger 2.11mm barrel increase. Gasoline stocks dropped very marginally, but not the build we saw in API data…

WTI was trading around $69.50 ahead of the official data and dipped only modestly after surprisingly large crude build…

“There are bottom pickers trying to get into this dip,” said Bob Yawger, director of energy futures at Mizuho in New York.

Analysts at Goldman Sachs Group say that the extra barrels of oil promised by OPEC won’t be enough to plug the gap between production and recovering demand. They see Brent, the global benchmark, trading at an average of $80 a barrel in the fourth quarter, though they warn of the potential for prices to “gyrate wildly in the coming weeks.”

Bloomberg Intelligence Senior Energy Analyst Vince Piazza warned that global balances for crude oil faces two-pronged pressure from the growing dominance of the delta variant of Covid-19 and OPEC+’s plan to boost production next month. Softer prices across the energy sector may curb some concerns about broad inflation pressure. Meanwhile, we see near-term production in the U.S. remaining pretty resilient through the summer, with inventories for the week of July 16 expected to fall by 4.99 million barrels.