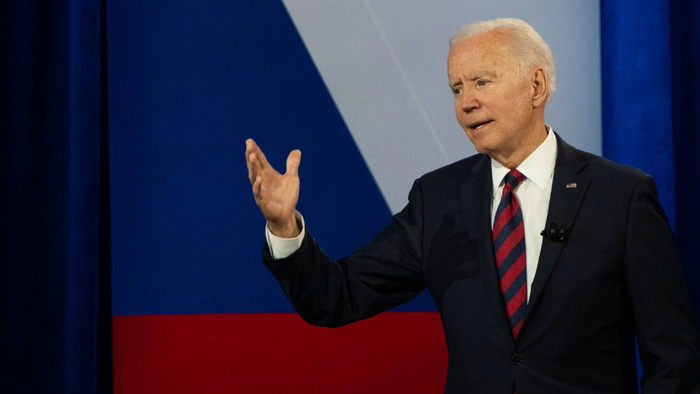 
President Joe Biden waved off long-term inflation concerns on Wednesday, telling a CNN town hall in Cincinnati that it won’t persist as the economy emerges from the pandemic.

“There will be near-term inflation” because the economy is recovering, he said, adding that ‘most economists’ think “it’s highly unlikely that it’s going to be long-term inflation that’s going to get out of hand.”

He then cautioned restaurant owners and others in the hospitality sector that recovery may not be swift – telling one restaurant owner that he may be “in a bind for a while” because workers are seeking better wages and working conditions, according to Bloomberg.

“It really is a matter of people deciding now that they have opportunities to do other things,” he said, adding “People are looking to make more money and to bargain.”

Inflation has become a political liability for the White House in recent weeks. The U.S. experienced the largest surge in consumer prices in more than 12 years last month, with a Labor Department gauge rising 5.4% compared to one year ago.

“Inflation is driving the cost of everything through the roof,” Senate Minority Leader Mitch McConnell of Kentucky said at a news conference Wednesday opposing Democratic calls for Biden’s long-term social spending plan. –Bloomberg

Republicans, meanwhile, largely blame Biden and Democrats for the labor shortages at restaurants and other low-wage businesses because overly-generous pandemic stimulus has removed incentives to get back to work. Biden, in response, suggests these low-margin businesses should simply pay people more – calling rising wages a “feature’ of his economic plans.

Job openings continue to hit record highs despite elevated unemployment. According to the report, the hotel and restaurant industries had 1.25 million vacant jobs in May, up from 807,000 in February 2020.

“A lot of people who work as waiters and waitresses decided that they don’t want to do that anymore because there’s other opportunities and higher wages, because there’s a lot of openings now and jobs and people are beginning to move,” said Biden.

Biden also expressed confidence that he can still secure the passage of a $1 trillion bipartisan infrastructure package despite GOP lawmakers blocking its first congressional vote on Wednesday – which Biden called “irrelevant.”

“It’s necessary, I really mean it. It’s going to not only increase job opportunities but increase commerce. It’s a good thing and I think we’re going to get it done,” he said.

As the Financial Times notes, “Although US growth and job creation have jumped since Biden took office in January, the economic outlook has been clouded by the resurgence of coronavirus because of the rapid spread of the contagious Delta variant as well as an unnerving rise in inflation.”

Biden also pushed vaccinations, which have slowed in the United States as cases nudge higher. He said they would receive final approval from the Food and Drug Administration soon, and would be available for children under the age of 12.

Except 40% of UK hospital admissions are those who have been vaccinated, while Israel has had even higher numbers, and the most vaccinated countries are experiencing COVID case spikes vs. the least-vaccinated. Meanwhile, over 6,000 people have officially died shortly after receiving the vaccine, according to the CDC.

“7 fully vaccinated people have died from COVID-19 in El Paso.”https://t.co/xXjsxoLdt9

Biden had an awkward brain freeze during the vaccine Q&A.

Biden slammed Republican legislators over voting integrity legislation, calling them “Jim Crow on steroids,” however he maintained his support for the legislative filibuster.

“There’s no reason to protect it other than you’re going to throw the entire Congress into chaos and nothing will get done,” adding “Nothing at all will get done.” He followed up by saying that there was ‘too much at stake’ to risk that level of ‘chaos’ that a filibuster fight would ignite.

81 million votes. The most in history. https://t.co/0zrDF1zhdt