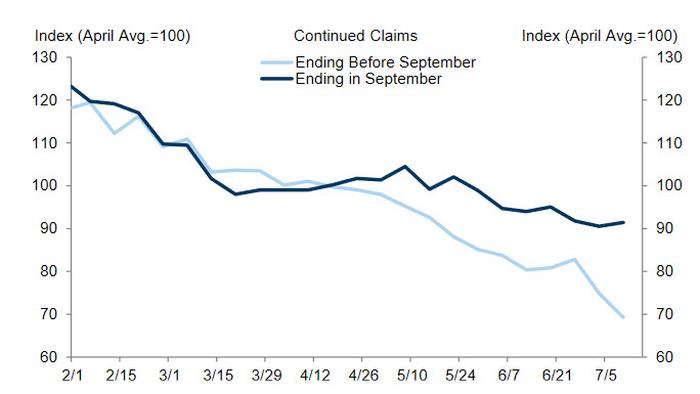 
Two months ago, when we observed that with 23 – all republican – states announcing at least some form of early reduction in pandemic-related unemployment insurance benefits ahead of the September expiration at the federal level…

…  we said that “since Democrats will likely not end UI benefits any time soon – or ever, if they could –  this sets up the US economy to become an epic real-time economic experiment, one where everyone can keep track of the unemployment across in Red states (most of which have ended their UI benefits), and blue states where claims will keep potential workers at home, pressuring unemployment rates.”

Well, one month ago the early verdict was in and as Morgan Stanley found at the end of June, not only were Republican states right all along to end benefits early, but that the primary – and biggest – reason for the unprecedented shortage in workers has been Joe BIden’s catastrophic socialist policy of having the government match or even surpass what the private sector is paying, to wit:

… the initial jobless claims and continuing jobless claims are declining faster in these 10 states, relative to the rest of the US (see Exhibit 17 and Exhibit 18), suggesting that an end of these benefits over the coming weeks in all other states could prove to be an important tailwind for labor supply,and ultimately higher payrolls.

Yes, Morgan Stanley we agree: the end of ridiculous, socialist policies will certainly be a much welcome tailwind not only for labor supply and higher payrolls, but a much more stable society.

It’s not just Morgan Stanley. On Sunday, the WSJ picked up on this and reported that “the number of unemployment-benefit recipients is falling at a faster rate in Missouri and 21 other states canceling enhanced and extended payments this month, suggesting that ending the aid could push more people to take jobs.”

The number of workers paid benefits through regular state programs fell 13.8% by the week ended June 12 from mid-May—when many governors announced changes—in states saying that benefits would end in June, according to an analysis by Jefferies LLC economists. That compares with a 10% decline in states ending benefits in July, and a 5.7% decrease in states ending benefits in September. Workers on state programs would lose the $300 weekly federal enhancement but could continuing receiving the state benefits.

Jefferies also found somewhat larger decreases in the number of people receiving benefits through pandemic programs in states curtailing benefits, though the data lags behind by an additional week. In many cases, those recipients will be cut off entirely when their state ends participation in the federal programs.

“You’re starting to see a response to these programs ending,” said Aneta Markowska, Jefferies’ chief financial economist. In recent months “employers were having to compete with the government handing out money, and that makes it very hard to attract workers.”

And here is just how fast things will turn around once people’s welfare is cut:

Then a few weeks ago, things began to change at its Missouri locations. At one property, seven people came to a job fair, which Ms. Eigelberger took as a positive sign. Then, two weeks ago, the Element St. Louis Midtown hotel had a breakthrough with 40 job seekers, she said.

“It’s crazy how quickly” things seem to be ramping up, she said, noting that workers in other states where Midas operates and the federal benefits are still in place appear reluctant to re-enter the workforce.

The hotel had 11 openings, including housekeeping, front desk and food-service jobs, Ms. Eigelberger said. It offered positions to nine job seekers at the fair, and all of them arrived for their first day of work. Several of the new hires had been out of work for at least six months.

So fast forward to today’s latest initial jobless claims report. which wrong-footed the market with a misleading headline, which found that in the latest week, the number of initial claims recipients jumped by 419K, far more than the 350K expected, with increases in some auto-producing states potentially related to factory retooling.

But the real story is what was below the headline: according to the DOL, the total number of claimants collapsed by 1.263 million, as over 1.1 million emergency pandemic claims ended.

But the kicker in today’s report was looking at the data at the state level, which confirmed what we had known all along: as Goldman writes, below, continued claims in regular state programs diverged further between states that are and are not ending benefits ahead of their statutory expiration in September in the week ending July 10. In other words, while jobless claims – both initial and continuing – are tumbling in Republican states, helping to rapidly renormalize the labor market,  they have barely budged in Democrat states.

Of course, in retrospect this should hardly be a shock: after all paying people not to work means that – gasp – they will sit on their ass and not work. What is idiotic and completely unexplainable is why a government would pull such a policy straight out of USSR central planning in “hopes” of boosting wages by creating a labor shortage when in reality all it does is create nothing but worker and wage chaos and resentment among those who vow to never work again and instead choose to sue the their state rather than go back to the labor market such as Sharon Singer-Mann whose story we profiled recently.

And once done contemplating the dumpster fire that the economy is in many if not all blue states, consider this: once Federal benefits run out and millions of workers flood back into the labor market, what happens to not just their wages but to everyone else’s wages as companies that have been hammered on their gross profit not only the fat but also muscle. Just how long before the current inflationary burst turns into all-out stagflation.